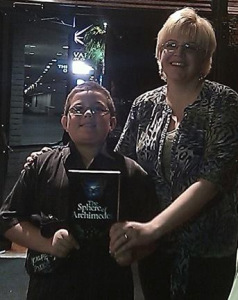 Heather Squires’ life calling to be an author began in 1989 in Phoenix, Arizona. As an editorial writer on staff at the Utopian Newspaper, she decided to seek further review and publishing. The first project to be completed outside of the journaling world was To Desecrate Man, an action novel; completed in 2005, it became over shadowed by the second project: Rogue, a young adult fiction-adventure novel.

Upon completion of Rogue in 2009, Squires’ place in the young adult fiction world became clear. The Sphere of Archimedes began to take shape, and was finished in 2011. Currently working on the sequel, The Omphalos of Delphi, she continues to create anticipation for the future of young adult fiction.

What is H. Squires’s Genre?

What is  H. Squires’s Inspiration?

“As an observer, I watch ominous clouds collide in the blue firmament. A black-hooded, male sparrow puffs out his chest, and struts to impress a potential mate. While skating over a broad leaf, a snail’s eyes –perched on tall stalks, nods from the slightest breeze.

The daily creations displayed before our eyes, inspires me to write. I cannot go to my grave without trying to verbally describe God’s handiwork—and, if I can tell a story within the narrative, then [I hope] I do Him justice.”

What is H. Squires’s book about?

The Sphere of Archimedes 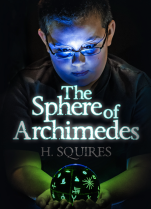 “Professor Donovan Spiegler, and nine-year-old Oliver Abernathy have no warning that their seemingly routine lives will free-fall into danger and adventure in this sci-fi thriller: THE SPHERE OF ARCHIMEDES.

Oliver, a chubby, freckle-faced boy, is surviving a mundane school-life as the helpless victim of a bully, Dylan Parker.

The Professor, and his assistant, Cedrick Wilhelm, are researching a mysterious metallic orb when Cedrick goes missing, and so does the orb.

On a trip to the Grand Canyon with his family, Oliver discovers a metallic sphere that has special powers. His boyish curiosity builds as he tests the abilities and hazards the orb possesses. He learns the alarming side of the orb when Dylan Parker, the bully, opens it, and is vaporized—or so Oliver believes.

A group of threatening men turn up at Professor Spiegler’s class; at knife point, they demand he relinquish the orb, and show them how to release its powers. In an attempt to flee, the Professor inadvertently leads the mobsters straight to Oliver Abernathy and his family.

In the thrilling adventure that follows, the characters discover the need to work together in order to stay alive. The Professor and the Abernathys encounter other worlds, and meet deadly enemies. Their survival is hinged on solving THE SPHERE OF ARCHIMEDES.”

[See what H. Squires had to say about our editor!]

Tell H. Squires you heard about her on editingaddict.com!

Think upon your thoughts and it will take you higher